My first ever blog post. It is finally happening. I have so many things to write about but I thought I’d start with why the blog is named what it is and share with you my pregnancy journey.

In 2015 I had an ectopic pregnancy and very nearly lost my life. It resulted in me losing my right fallopian tube. To say we were devastated is an understatement. We were broken. We had been so naïve in thinking that when we fell pregnant, that was it, we were going to have a baby. However, an ectopic pregnancy occurs to 2 in every 100 pregnancies and we were one of the unfortunate ones.

We grieved for the baby we lost for months but by last summer, after a holiday in Spain, we were finally starting to heal. We began trying again knowing that our chances of falling pregnant were slimmer but we still had good odds. January 31st of this year we were absolutely thrilled to find out we were expecting again. I say thrilled, this time it

was less exciting. It was now filled with anxiety and dread that this would be another ectopic and I would lose my remaining tube. We had an early scan at 6 weeks and the sonographer found a yolk sac, this confirmed that the pregnancy wasn’t ectopic, the pregnancy was in the right place but because she couldn’t see the fetal pole yet we had to go back two weeks later. Cue two weeks of still panicking, was our baby going to be there when we went back? I remember trying to remain hopeful but I also had prepared myself for the worst. I had resigned myself to the fact that this wasn’t going to happen for us and we were going to have to explore other avenues. The 8 week scan arrived and lo and behold, there was our baby. A baby in the right place with a beautiful beating heart. The sigh of relief and tears that followed. We went for cautious celebratory pancakes. Was this actually happening?

We got to 10 weeks, we’d had our ‘booking-in’ appointment with our midwife and we were in the system. We had a due date and knew to expect our rainbow baby in October 2017. Then I had a small bleed. That was it, I assumed it was over but another early scan showed the baby was growing well, a beautiful strong heartbeat and the bleed was just a bit of old blood (sorry for TMI!) We thought we just had to get to our 12 week scan and maybe we could believe this was finally happening.

Monday 27th March 2017 finally arrived, our 12 week scan. It was incredible. There was our baby, fast asleep at first but after a prod he woke up. What a beautiful sight. There was our rainbow with arms, legs and a strong heartbeat ready to enter the world on the 4th October. I still couldn’t believe it was happening, I was convinced something would go wrong but as we began to tell people and the news sunk in and I stared at our scan photos I let myself believe that we were finally going to be parents.

The weeks slowly passed by, I loved waking up every morning and checking my pregnancy apps finding out what amazing thing was happening to our baby that day. Each day that passed I started to let myself believe. Then in my 15th week I remember feeling my first flutter. People thought I was mad but I just knew. There was nothing else I could put it down to. It was our baby. There was a whoosh, a fizz, something that you couldn’t explain but I knew it was our rainbow. It was amazing and I began to feel it most days. That filled me with belief even more. We had our 16 week appointment and heard the baby’s heartbeat. What a moment that was. That again gave me even more reason to believe. Each milestone that passed was so important. 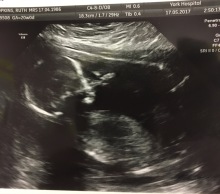 been placed and most people thought we were having a girl. I don’t know how or why but I just knew it was a boy. I knew it from our 6 week scan and I was right. We were team blue. It was a he, a him, our son. The 20 week scan was magical; the sonographer gave us so much information about our perfect little rainbow. She showed us the roof of his mouth, his spine, his brain, his long legs – I was amazed. There was our beautiful boy, sucking his thumb and quite happy to show us he was a boy! We left the hospital and drove straight to Next to buy some baby boy clothes. We came home and got our gender reveal ready. We filled a balloon with blue tissue paper and waited excitedly for our family to come round. We were both inundated with messages from people desperate to find out. It was so nice having our little secret for a few hours. My family came round, the balloon was popped, the secret was out and we could tell the world we were expecting a boy. That was my turning point, that was when I really believed it was happening. How I wish it still was.

The next few weeks were filled with Ikea trips, building of furniture and nursery decorating. Our rainbow was now kicking, properly kicking and I will never forget the night my husband first felt his son kick. His face just told me he had felt him, the love we had for our son was incredible. We had waited so long for him, we had suffered such trauma and now he was in my tummy, kicking regularly and filing our lives with such joy and excitement. We let ourselves believe. The hopes, the dreams, the promises…everything we were going to do with Dexter. However, the week of the 12th June sadly changed all that forever. We lost our son. Those hopes and dreams were smashed to smithereens. We left the hospital empty-handed, with heavy hearts and full of grief.

How could this be?

This blog intends to share our story, the ups and downs, the highs and lows, the reality of child loss and what it does to you. I am an eternal optimist and I endeavour to wade through this shit and remain hopeful that we will have our rainbow baby one day.

Thanks for bearing with me, for reading my ramble and if you got right to the end then well done for wading through the shit with me!

35 thoughts on “Why we’re wading through shit…”